Posted on January 8, 2015 by elusiveancestorhunter

The Challenge continues in 2015 which Amy Crow started last year on “No Story too Small”. We were encouraged to write each week about an ancestor, thus giving us 52 ancestors in a years time. Last year I fell behind, I am sorry to say. I did have some great chats with some family members regarding their various connections that matched mine. This is what it all is about. Connections!

Each week, I will try to give you insight into either Mine or my husband’s family. Please drop me a line in the comment section, I love to get feedback. This weeks optional theme was “fresh start”. I thought of this but decided for me, to be given the opportunity to begin again and attempt to complete the 52 ancestor challenge was indeed a “fresh start”. So without further ado, let the stories begin.

This week I will be showcasing the oldest son of last years post #3, Lorenz Müller. John Miller was born on the 14th of January 1857 while his parents were still in Cincinnati, Ohio. His birth date was taken from his tombstone, I have not been able to locate the church records for the baptism of he and his brother. Lorenz and Christina were married at St. John the Baptist Catholic Church in Cincinnati.

Railway from Cincinnati that Christina would have taken to Dabney. http://www.in.gov/indot/files/MAIN-RR-11_V1.pdf

John, his baby brother William and mother Christina took a train from Cincinnati to Dabney, Indiana before the 1860 Census (they are living in Otter Creek Township by this time). Christina was met by a woman named “Aunt Lizzie Salyers”, Lizzie walked with Christina and the boys about 3 miles down to where Lorenz had built a home for them in Otter Creek.

John attended church at St. Magdalene Catholic Church in Shelby Township, which was about 2 miles to the west of their home. He married his first wife, Caroline Fels from St Magdalene in 1887 according to the 1900 census. John is a farmer by trade, his land is surrounded by family. He lives across the road from his parents, his brother Henry is on the same side of the road but just north. His land sat at the southwest corner of current S. County Road 600W and E. County Road 100S. Here are the pertinent areas of Otter Creek Township showing the owners of that area in the 1883 and 1921 Atlas of Ripley County. 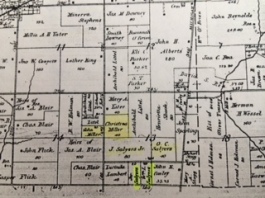 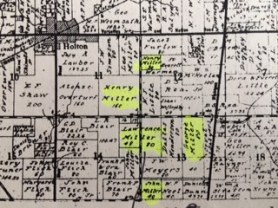 Here is the home that the Miller family built for John and Carrie. It appears to be very similar to Lorenz and Christina’s across the road. John and Carrie lived there until her death 15 Feb 1915. They never had any children. John marries Catherine Meisberger (daughter of Peter Meisberger and Mary Stulig) on 4 Oct 1921. This home remained until the Jefferson Proving Ground was born in 1940-41. At that time John had passed away in 1940 and Catherine in Sept. 1941. 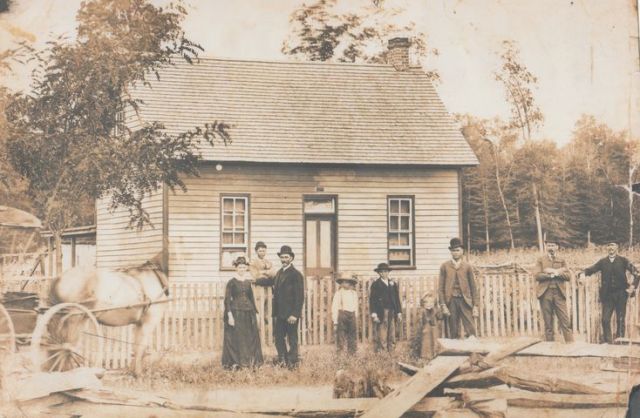 John Homestead 1892 on the west side of S Co Road 600S. L to R Caroline, Lawrence, John, Alex, Albert, Mary holding William’s hand, George, and Henry at the far right. Notice the horse and buggy, the horse almost looks like a ghost image. 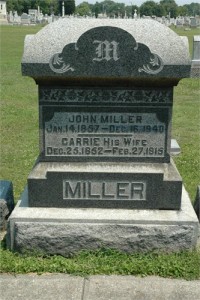 This concludes a look into the first of Lorenz and Christina’s children. Stay tuned for more on the Müller/Miller family.

Wandering Through My Roots

As Canadian as can be

My Hogue and Girardin ancestors