Posted on January 15, 2015 by elusiveancestorhunter 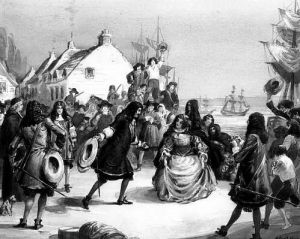 This week our subject had to do with the work “King”, well I don’t have any Kings or royalty in my lines, nor do I have the surname King. While I pondered how I was going to accomplish this one, it occurred to me that I did have someone who had something to do with a King.

The term “Fille du Roi” translates to the daughter of the King. When my father and I started our genealogy we asked members of the family what did they remember about their ancestors. My uncle Daniel Lapointe of Granby, Québec, told of a princess in the family. He couldn’t remember which side either the Bouchard or Lapointe but that there was a princess somewhere. While dad and I were digging through the names and dates, that we discovered that one of our first ancestors was only about 14 years old when she was married. This lead us to a humm moment.

Okay, when digging around the books on the earliest settlers we came across some references to the Fille du Roi, these were orphans that were given a dowry by King Louis XIV of 50 livres, “each girl received a small case which held the following: a bonnet, taffeta handkerchief, a pair of stockings and gloves, four shoelaces, white thread, 100 needles 1000 pins, a comb, pair of scissors, two knives and two livres in cash”.

Now to understand the meaning of sending these “girls” to New France it was to help populate the country and make the King’s soldiers and settlers happy with women to choose for marriage. The King had been sending his soldiers over to strengthen the colony and had hopes that some of them would stay to keep it growing.

The men outnumbered the marriage females in the colony, so the King and his advisers determined this was more efficient to both keep the men there and get rid of the “poor orphans” that might have been a drain on the coffers of the King. In 1663 the King initiated the recruitment (this usually took place in Paris, Rouen, or other Northern cities) and transporting of marriage women to New France. Thirty-six girls arrived on September 22, 1663, this was the first wave arriving in Quebec. In all there were 560 that remained in Québec City, with 133 going on to Montreal and 75 to Trois-Riviéres.

When the girls arrived they were paraded off the boat and the men would get their first look at the latest crop of possible wives. They were then taken to a dormitory style building under the care of a chaperon who would also be there to keep an eye on the couple as they met and made choices of their mate. The girls were able to decline or choose their mates this process could take up to fifteen months but was generally about four to five months long. After they had made a decision, a marriage contract was drawn up in front of a notary and the wedding took place about 30 days later.

Now, back to our Madeleine Després, her parents were Francois Després and Madeleine LeGrand and she was born about 1656 in Paris, France. According to my research in the French Archives she was a member of Saint Sauveur in the 2nd Arrondissement of Paris, a wooden church that was on the corner of St.Sauveur St. and St-Denis St.. When I visited Paris in 2010 I stood on the corner where the church existed and felt at one with Madeleine.

Corner signs of St Denis and St Sauveur Streets in the 2nd arrd. of Paris.

Showing the actual corner where the church would have stood. You can see it is a pretty busy corner with shops and apartments.

Her parents were residents of Paris with not much known of them other than they were members of St Sauveur. Paris records for that time frame are practically non-existent. Usually the “fille du roi” were orphans, so we can presume that her parents are deceased at this time. There are many descendants that all have the same information, which is really nothing, only presumptions. I stood on the corner of St. Sauveur and St Denis where the church would have stood (see photo to the left and right), you can imagine the feeling of excitement that was felt be stepping into the same streets that my ancestors walked on.

Madeleine Després sailed from France on the ship “St John the Baptist” during the summer of 1670 arriving in Québec in mid August 1670.  According to the summary of the ship, there were at least four girls about 14 years, eight of 15 years, two 16 and six 17 years.  “What is known is that on Saturday, August 30, 1670, just two to three weeks after the arrival of Madeleine”, she and Nicolas Audet ( age 33 years) with the matron who had accompanied her from Paris, was at the notary Becquet in Québec to sign the marriage contract. The couple was married two weeks later on Monday, September 15,1 670 at the Church of Ste-Famille on the Ile d’Orléans where Nicolas Audet had been living and had land purchased three years earlier.

Marriage Contract of Nicolas Odet and Madeleine Despres 15 September 1670 Sainte-Famille IO Nicolas is the son of Innocent and deffunte (deceased) Vincente Reine, Madeleine is the daughter of Françpois and Madeleine LeGrand http://www.migrations.fr/ACTESFILLESDUROY/actesfillesduroy_D.htm

Of this union Eleven children were born eight boys and three girls;

2.Nicolas b. Sept 1672, this second child was named after the first child according to the french custom of this age, if a child died the next time a child of the same sex was born, that child took the name of the deceased child.  Since usually they were named after family members, this was a way to keep the family names going.  Nicolas married Marie Louise Chabot.

Madeleine and Nicolas lived on the land at St Jean on the Ile d’Orléans until his death on 9 December 1700, Magdalene would only have been about 45 years old with six small children at home.  So their fifth child Joseph age about 20 at the time ran the family farm and helped with the smaller children.  She lived on the farm until her death after three days of illness on 18 December 1712 and was buried the next day in the cemetery of St-Jean on the Ile d’Orléans at the age of about 56 or 57 years.

much knowledge was taken from :