Amy Crow of “No Story too Small” challenged the genealogy community to get out and write. The Challenge was to write about 52 ancestors in 52 weeks. This is my attempt to share my love of genealogy with others.

Today is the day that my maternal grandmother was born 107 years ago on the 16th of December 1907 at 7:30 am at 13 Tureen St., in the city of Glasgow in Scotland. What I love about using ScotlandsPeople for research is you can get so much information from the either the Statutory Registers (records after 1855) or the Old Parish Registers (digital copies of the Parish pages prior to 1855). As you can see from grandma’s birth register there is a wealth of information. It gives the time and location of the birth, parents names and occupations along with the day and place of the marriage.

Janet and her family in the 1911 Census for Scotland were living at 28 Glenfield St., in Glasgow. Her father, William age 51 was a Detective Sergeant, Margaret age 40, William’s Children from his first marriage to Christina Low Sim; Helen age 16, William 14,and James F age 12, then William and Margaret’s daughters Margaret 4 and Janet 3.

I remember my grandmother talking about living in Glasgow, life in a tenement, sleeping in an alcove in the kitchen – so there would be room for boarders, violin lessons, Wedgwood pottery, walks with her father in the neighborhood where his police station was. Her father, William, passed away in 1920 while the family was on a holiday to Rothesay, Bute and was buried in Glasgow. I was told a story, from a cousin who heard it from her father, that after William passed away on the return journey back to Glasgow on the ship , my great-grandfather was transported in a coffin on the deck. Apparently some man was sitting down on it, and grandma did not like that. Mind you she would have been 12 years old at the time. She asked him politely to get up and he refused, she then apparently told him to get up off her father. The man did and all was well, but this just reinforces my memories of grandma as a force to be listened to. If she believed something was right, she would let you know. All their lovely items were left behind when Margaret and Janet immigrated to Canada in 1927 on the SS Letitia.

Margaret and Janet ultimately ended up in the Toronto, Ontario region where there was a great influx of Scottish immigrants. Janet met Frank Wright ( another immigrant from Scotland) through church friends. Frank was living in Detroit, Michigan, but visited frequently and on the second of June 1930 they were married in Toronto, Ontario, Canada. 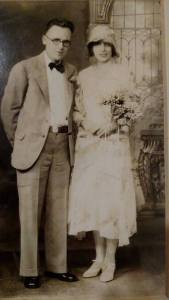 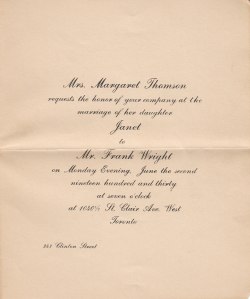 Wedding invitation of Mrs. Margaret Thomson to the wedding of her daughter, Janet to Frank Wright

To this marriage, two daughers were born, Janet in 1932 and Elizabeth in 1938. The couple moved around in the Detroit area until they purchased the home on Asbury Park in Detroit that all of the grandchildren remember. This is where both girls and Margaret Thomson lived with Janet and Frank. The below photo was taken at their 25th anniversay. 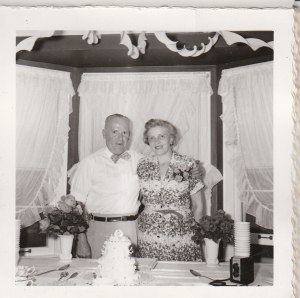 Anniversary at the Asbury Park home.

After Frank passed away in 1974, Janet moved in with her daughter Janet and family. It was during this time, she became one of my dearest friends, not just a grandma. After a bit she decided it was time to move out and spread her wings. She loved to play cards, and learned how to play Bridge (which became a passion), she crocheted many items (I still have the baby blanket she made for my first baby). We used to call her “Diamond Lil” because she loved jewelry, and rings in particular. She loved spending time with family and family loved having her with them. When I moved out to Tecumseh Michigan from the Metro Detroit area, my parents moved along with my grandmother, they asked if I minded and I was thrilled to tell them “come on down”. It was wonderful to have my children grow up with grandparents and a great grandma. In fact, when I was pregnant with my youngest, Janet mentioned she had never seen a birth, I jokingly asked if she wanted to see this one being born. She took me up on it! It was such a blessing to have both her and my mother in on the birth along with my husband. This was in 1991, so it still was kind of special, not like today where everyone and the entire neighborhood show up and want to be there. 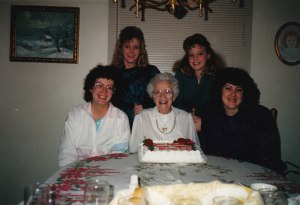 Birthdays were big with us and I just have to share this one. It would have been about 1989. We had a party out at my new home in Tecumseh, both of Janet’s daughters and families were there. To the left you can see us girls with grandma.

Life was good until 1997 when Janet was admitted to the hospital Christmas Eve morning in respiratory distress due to pneumonia. I spent the night after going to midnight service at the Tecumseh Presbyterian Church where we both attended. I told her the songs we sang and the sermon. We chatted a bit but it was difficult. She passed away early Christmas morning. There is so much more that I could share but there just isn’t enough time nor space. Comments from family are appreciated.

William Thomson mentioned above is also noted in Ancestor#1 of my 52 in 52 weeks.
Big thank you to Krista Gallo for supplying the wedding photo I could not find in my stash of stuff (moving boxes etc.)

Tapping into your ancestral health and wellbeing