Posted on February 16, 2014 by elusiveancestorhunter

William Williams Newman is the son Richard Newman, a whitesmith of the city of Gloucester and Little Dean , both are located  in the county of Gloucestershire, England.

A whitesmith did finer work on lighter metals than the Blacksmith.  William would have spent his days learning a trade from his father Richard.  Richard is listed as either an Innkeeper or a  Blacksmith in the parish records of St Ethelbert for his children’s baptisms depending on which year and which child.   Near as I can tell from my trip to Littledean in 2005, the location of his Inn or Blacksmith’s shop would have been next door to each other on Broad Street just down from St Ethelbert’s parish church. Littledean is a small quaint village, very picturesque next to the Forest of Dean which dates back to the late 11th or early 12th centuries.

William was with his wife Eleanor Surman in New York City, New York in 1833.  They are listed in the St. Mark’s in the Bowery Church records for the baptism of their oldest child, James Williams Newman on 11 Aug 1833.  How they got there, where they lived, when they left will continue to be a mystery.  The 1830-1835 New York City Directories do not  have either  William Williams Newman or Frederick Surman (Eleanor’s brother and all spellings were searched), Fred comes over to New York City about the same time, they might have all migrated together but Fred stays behind and the New York Surman’s come from him.  The passenger lists for that time are few and far between, not really well indexed and most were destroyed in fires.  Ships coming back to England with passengers listed are also very hard to locate.  So that was thought of but not executed due to lack of records.

This was the typical ship at the time for travel to and from the New or Old Country.

In the St. Ethelbert Parish records we find, a birth for Jane Williams Newman on 24 Apr 1835.  The family then moves to Asted, Warwickshire, England where child #3 is baptized Elizabeth Williams Newman on 1 Jun 1838, she dies on the 6th day of June 1838 in Aston. Child #4 is William Williams Newman baptized on 19 Apr 1839 in Aston also in Warwickshire.  William Sr is listed as a nailor on the children’s baptisms.

In 1841, the family is back to Littledean, actually Blaize Bailey which lies just outside of Littledean in the Forest of Dean.  William, Elinor (note spelling), Jane and William are in the household.  Older son James is either visiting / helping out or living with his elderly grandparents in Littledean, since that is where he is listed that particular day.

According to research, “Nailmaking had been established by 1327, when a nailor was one of the wealthier inhabitants,  and became the most important trade in Littledean”, this was from the British History Online website  http://www.british-history.ac.uk/report.aspx?compid=23258#s6 for your reading pleasure.

Business must have been better over in Ross on Wye in the Herefordshire area since we next find William and family in that town. Children Henry John baptized on 14 Feb 1847, Elinor in early 1848 followed by Frederick on 5 Nov 1849 all in Ross on Wye.  Ross on Wye is a very pretty Market town. 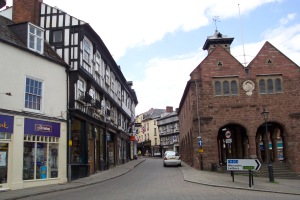 Street that the Newman family lived on in 1847. Note the unevenness of the House on the left side. Dates back to the 1500’s. The brick structure in the middle was the Market square.

Birmingham is the next and final stop for the William Williams Newman family.  Here they are in the census at Inge St Court 14.  He is listed as a Nail Forger, with Eleanor, Jane, William, Henry John, Eleanor and Frederick living in the family unit.  Their oldest son is James and he is living nearby as a Confectioner apprentice.  Emma their last child is born in 1852 but wasn’t baptized until 1869 at the age of 17 years.

In the 1861 census, they family has moved to 4 Mark Lane.  William is listed as a Horse Nail Maker both the 1851 and 1861 census.  Birmingham is an industrial town, lots of business for a nailmaker.  But, that being said, sanitation was not a priority in the lives of busy Brummies.  William contracts Typhoid Fever and dies on the 9th of November 1869. 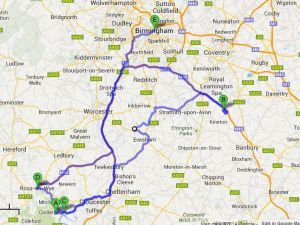 This is the journey William Williams Newman took his family.
A- Littledean
B-Aston
C- Littledean
D-Ross on Wye
E- Birmingham

If you look online at the Back to Back’s of Birmingham, England this court was next door to the one the Newman family lived in and our cousin, Anne Tees, actually volunteers there.  It was a moving experience for me to visit.

Side story: I was in the city of Worcester and asked at a visitor centre about the Back to

Sweet shop on Corner, the entrance to the Courtyard is just to the right of the store.

Back’s (they had a poster up on the wall), I was told I needed a ticket and I could purchase one there but they were hard to find openings.  The woman checked and found out the next showing had an opening, now I was in Worcester (car was parked in a lot), needed to get to Birmingham in a very short time.  I was told run down the street and catch the next train, get off and go to the back to back’s.  Now I have no idea where I’m getting off the train or where the heck the Back to Back’s were but figured I’d find them.  So, off I run with my shoulder bag (full of stuff – guide books, papers, etc), my asthma had kicked in with the humidity.  So short of breath, running to the train asking directions, I get on the train just as the doors close (automatic) on my bag.  I’m thinking this is just my luck, about in tears at this point, someone helps me pull the bag inside.  I sit down and try and compose myself and

You can view the inside what would have been the separate homes within the court.

figure out the next run once the train stops.  Very nice train by the way.  I ask if anyone knows Birmingham well, I get strange looks but oh well I got some directions.  The train takes about 30 minutes, so once my stop comes , off I set, asking directions I finally get to the Back To Back’s and they are waiting on me, how sweet. I was a bit late.   I felt so blessed to actually be so close to where my ancestors walked 150 years ago.  Snapped photos, chatted it up, told the guide that my ancestors lived in Court 14, absorbed all she told me about the various set ups 1830-1960’s.   Actually she told me that they didn’t have flush toilets until 1969.  The community well, it was by the Hippodrome I passed along my run from the train.  So after that emotional experience I found my way back to the station for my ride back to Worcester.  Then the drive back to the Inn where William’s widow lived for many years with her aunt Susannah Green Bullock working at the Coventry Arms Inn in Upton Snodsbury, Worcestershire.

The Coventry Arms about the time Elinor Surman Newman was living here with her aunt the owner, Susannah Green Bullock

Now you can understand why I call William Williams Newman “a traveling man”, I never thought of my ancestors as that mobile.  For me to cross the Ocean it took a bit of doing but he took the family twice, once each way.  So, take my word if you can’t find your people where they should be check where you least expect them.

Read more about Back to Backs at  http://www.nationaltrust.org.uk/birmingham-back-to-backs/

This entry was posted in Elusive Ancestor Hunter. Bookmark the permalink.

Wandering Through My Roots

As Canadian as can be

My Hogue and Girardin ancestors